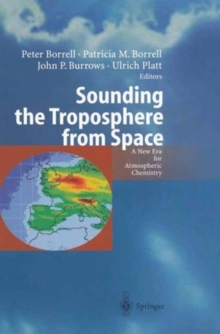 Sounding the Troposphere from Space : A New Era for Atmospheric Chemistry Paperback / softback

It is now possible to determine concentrations of trace constituents and pollutants in the lower atmosphere from space, a development which heralds a new era for tropospheric chemistry.

The authors describe how to develop and validate methods for determining tropospheric trace constituents from satellite data, to encourage the use of these data by atmospheric chemists, and to explore the undoubted synergism which will develop between satellite and ground-based measurements, and will eventually give rise to a permanent observation system for the troposphere.

The book comprises several comprehensive overviews, prepared by acknowledged experts in the field, together with a series of individual reports from investigators whose work represents the cutting edge of the subject.

A variety of results, giving global distributions of several species and their modelling are reported.

Most results stem from ESA satellite data, but there is also an account of the North American work in this field which has mainly concentrated on global distributions of ozone.

It is fair to say that the field, as it develops, will revolutionize the way in which atmospheric chemistry is done.

This timely book provides a good introduction for anyone with an interest in the future of the troposphere.