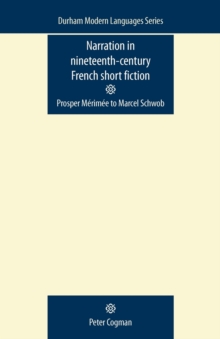 The short fiction that flourished in nineteenth-century France has attracted relatively little critical attention compared with the novel.

This study focuses on some key stories by major authors of contes and nouvelles from the late 1820s to the 1890s, taking as a starting-point, aspects of narrative technique as a way of exploring not just characteristic strategies of short fiction, but also the ends to which they were put: recurrent themes, and the vision of mankind.

Each chapter looks in some detail at three or four stories, referring briefly to other tales for illustration.

The underlying point that emerges from this study is that the interest of a tale lies in the telling, not the events. -- .