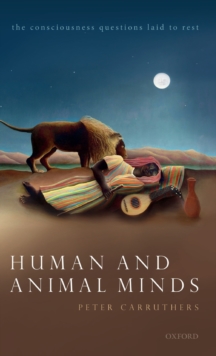 The continuities between human and animal minds are increasingly well understood.

This has led many people to make claims about consciousness in animals, which has often been taken to be crucial for their moral standing.

Peter Carruthers argues compellingly that there is no fact of the matter to be discovered, and that the question of animal consciousness is of no scientific or ethical significance. Carruthers offers solutions to two related puzzles.

The first is about the place of phenomenal-or felt-consciousness in the natural order.

Consciousness is shown to comprise fine-grained nonconceptual contents that are "globally broadcast" to a wide range of cognitive systems for reasoning, decision-making, and verbal report.

Moreover, the so-called "hard" problem of consciousness results merely from the distinctive first-person concepts we can use when thinking about such contents. No special non-physical properties-no so-called "qualia"-are involved.

The second puzzle concerns the distribution of phenomenal consciousness across the animal kingdom.

Carruthers shows that there is actually no fact of the matter, because thoughts about consciousness in other creatures require us toproject our first-person concepts into their minds; but such projections fail to result in determinate truth-conditions when those minds are significantly unlike our own.

This upshot, however, doesn't matter. It doesn't matter for science, because no additional property enters the world as one transitions from creatures that are definitely incapable of phenomenal consciousness to those that definitely are (namely, ourselves). And on many views it doesn't matter for ethics, either,since concern for animals can be grounded in sympathy, which requires only third-person understanding of the desires and emotions of the animals in question, rather than in first-person empathy.