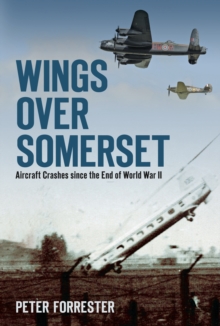 One evening as he made his way to a local church social in the village hall during the 1950s, a loud crack shook the ground and the night sky turned to an orange glow, lighting the way for him.

Shrugging his shoulders, the author made his way through the village, and in the distance he heard an explosion as a jet aircraft hit the ground.

It was a common enough occurrence in the village of Ilton; RAF Merryfield was always losing aircraft and on a regular basis. Fifty years later, and in an effort to put his indifference right, the author began to investigate air crashes in and around Somerset.

What he discovered appalled him at the sheer scale of it all.

He now shares his findings of Somerset air crashes since 1945 with you.