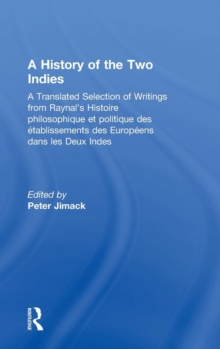 First published in 1770 and running to over one million words, Raynal's Histoire philosophique et politique des etablissements des Europeens dans les Deux Indes was an immediate bestseller that was to go through numerous editions in various languages.

Taking a radical anti-imperialistic stance, the nineteen books that comprised the original work covered the history of European colonisation of India, the East Indies, China, parts of Africa, and the Americas.

Much of the success, and subsequent reputation, of the Histoire was based on its attacks on tyranny, slavery and colonial exploitation, and it quickly became one of the basic texts for the humanitarian movement. In this current edition, Peter Jimack has chosen a representative selection of passages from all books of the Histoire that shows the breadth and scope of the work.

His translation into English of these from the standard enlarged 1780 edition captures all the vitality and passion of Raynal and his co-authors (including Diderot) and highlights just why this book had such a profound and enduring impact.

A helpful and detailed Introduction sets the work in its historical and philosophical context. As well as making available one of the key radical works of the later eighteenth century, this edition reveals much about the impact of foreign countries and cultures on Enlightenment thinking.

Dealing with the activities of all the main European colonial powers, France, Spain, Britain, The Netherlands and Portugal, it reveals much about their trading and imperial ventures across the East Indies and Americas, and the effect this was to have on both sides of the Atlantic. As such this edition will prove invaluable for all students and scholars interested in eighteenth-century colonialism, political theory, the history of foreign trade, slavery or Enlightenment philosophy.