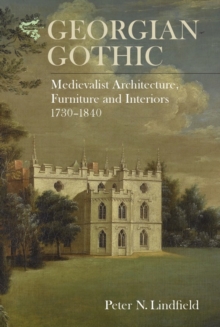 The Gothic Revival, rich, ambitious, occasionally eccentric, but nonetheless visually exciting, is one of Britain's greatest contributions to early modern design history, not least because for the most part it contravened approved taste: Classicism.

Scholars have tended to treat Georgian Gothic as an homogenous and immature precursor to "high" Victorian Gothic, and centred their discussion around Walpole's Strawberry Hill.

This book, conversely, reveals how the style was imaginatively and repeatedly revised and incorporated into prevailing eighteenth-century fashions: Palladianism, Rococo, Neoclassicism, and antiquarianism.

It shows how under the control of architects, from Wren to Pugin, Walpole and Cottingham, and furniture designs, especially those of Chippendale, and Ince and Mayhew, a shared language of Gothic motifs was applied to British architecture, furniture and interiors.

Georgian Britain was awash with Gothic forms, even if the arbiters of taste criticised it vehemently.

Throughout, the volume reframes the Gothic Revival's expression by connecting it with Georgian understandings of the medieval past, and consequently revises our interpretation of one of the most influential, yet lampooned, forms of material culture at the time. Peter N. Lindfield is a Leverhulme Early Career Research Fellow at the University of Stirling.