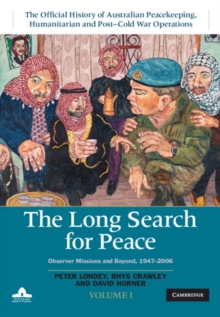 The Long Search for Peace: Volume 1, The Official History of Australian Peacekeeping, Humanitarian and Post-Cold War Operations : Observer Missions and Beyond, 1947-2006 Hardback

Volume I of the Official History of Australian Peacekeeping, Humanitarian and Post-Cold War Operations recounts the Australian peacekeeping missions that began between 1947 and 1982, and follows them through to 2006, which is the end point of this series.

The operations described in The Long Search for Peace - some long, some short; some successful, some not - represent a long period of learning and experimentation, and were a necessary apprenticeship for all that was to follow.

Australia contributed peacekeepers to all major decolonisation efforts: for thirty-five years in Kashmir, fifty-three years in Cyprus, and (as of writing) sixty-one years in the Middle East, as well as shorter deployments in Indonesia, Korea and Rhodesia.

It brings to life Australia's long-term contribution not only to these operations but also to the very idea of peacekeeping.