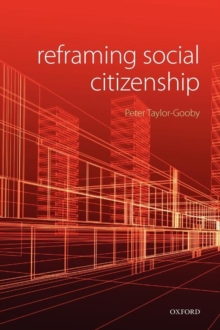 by Peter (Professor of Social Policy, University of Kent) Taylor-Gooby

Throughout the world, governments are restructuring social and welfare provision to give a stronger role to opportunity, aspiration and individual responsibility, and to competition, markets and consumer choice.

This approach centres on a logic of individual rational action: people are the best judges of what serves their own interests and government should give them as much freedom of choice as possible.

The UK has gone further than any other major European countryin reform and provides a useful object lesson.

This book analyses the pressures on social citizenship from changes in work and the family, political actors, population ageing, and the processes within government in the relentless international process of globalization that have shaped the response.

It examines the various social science approaches to agency and argues that the logic of rational action is able to explain how reciprocity arises and is sustained but offers a weak foundation for social inclusion and social trust.

It will onlysustain part of the welfare state. A detailed assessment of empirical evidence shows how the outcomes of the new policy framework correspond to its theoretical strengths and limitations.

They are much less successfulin redistributing to more vulnerable low income groups and in maintaining public trust in the structure of provision.

The risk is that mistrustful and disquieted voters may be unwilling to support high spending on health care, pensions and other benefits at a time when they are most needed.

In short, the reform programme was undertaken for excellent reasons in a difficult international context, but risks throwing the baby out with the bathwater.