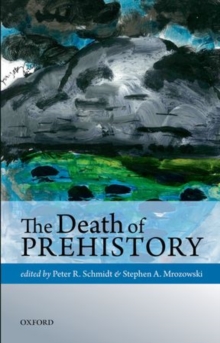 The Death of Prehistory Hardback

Since the eighteenth century, the concept of prehistory was exported by colonialism to far parts of the globe and applied to populations lacking written records.

Prehistory in these settings came to represent primitive people still living in a state without civilization and its foremost index, literacy.

Yet, many societies outside the Western world had developed complex methods of history making and documentation, including epic poetry and the use of physical andmental mnemonic devices.

Even so, the deeply engrained concept of prehistory-deeply entrenched in European minds up to the beginning of the twenty-first century-continues to deny history and historical identify to peoples throughout the world. The fourteen essays, by notable archaeologists of the Americas, Africa, Europe, and Asia, provide authoritative examples of how the concept of prehistory has diminished histories of other cultures outside the West and how archaeologists can reclaim more inclusive histories set within the idiom of deep histories-accepting ancient pre-literate histories as an integral part of the flow of human history.