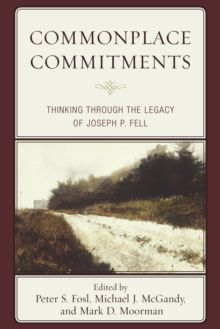 Joseph P. Fell proposes that the solution to the problem of nihilism is found in the common experience of persons and the everyday commitments that one makes to people, practices, and institutions.

In his landmark 1979 book Heidegger and Sartre, and in his subsequent essays, Fell describes a quiet but radical reform in the philosophical tradition that speaks to perennial dilemmas of thought and pressing issues for action. Since Descartes, at least, we have been puzzled as to what we can know, how we should act, and what we should value.

The skeptical influence of modern dualism-distilled in the mind-body problem at arose with the assertion "I think, therefore I am"-has shot through not just philosophy and psychology, but also society, politics, and culture.

With dualism arose radical subjectivism and the concomitant problems of nihilism and alienation.

The broad aim of phenomenology is to repair the rupture of self and world.

Announced by Edmund Husserl and developed by Jean-Paul Sartre, Martin Heidegger, and John William Miller, who drew from the North American tradition, this is the project to which Fell has devoted more than a half century of reflection and technical elaboration. In this volume, an array of scholars consider, criticize, and cultivate Fell's key contributions to the phenomenological project.

Ranging from analyses of key texts in Fell's phenomenology to probing examinations of his crucial philosophical presuppositions to the prospects for Fell's call to find the solution to nihilism in everyday experience-these essays gather the work of the authors thinking with and through Fell's key works on Sartre, Heidegger, and Miller.

Also included are seminal statements from Fell on his pedagogical practice and his conception of philosophy.