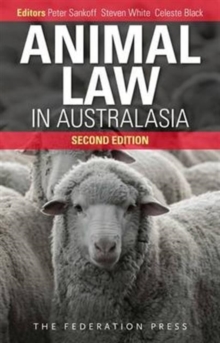 Many Australians and New Zealanders still assume that current animal welfare laws provide animals with sufficient protection from human mistreatment, that cruelty is the exception and that, when exposed, perpetrators are prosecuted.

They are wrong on all counts. Animal Law in Australasia, in its 1st edition, highlighted shortcomings in the existing framework and suggested ways in which the law could be improved.

It was well-received, with critics calling it "a book to be applauded" (Laura Donellan, Journal of Animal Ethics), "a must for anyone ... interested in animal rights and animal welfare" (Susan Briggs, Release Magazine) and even "a book that changed my life" (The Honourable Michael Kirby). This 2nd entirely revised edition builds upon the significant developments in animal law that have occurred since 2009 and also addresses emerging areas of concern, with 11 brand new chapters. Contributions from Australian, New Zealand and international academics and practitioners cover topics ranging from the explanation of basic concepts of animal protection and theoretical underpinnings of animal law to specific matters of interest including:*the regulation of companion animals*the use of animals in research*dog control legislation*animals in entertainment*the use of codes of welfare*the application of welfare standards to fish*the impact of WTO regulation on domestic efforts to control cruelty, and*Australia's new regulatory regime for live exports.