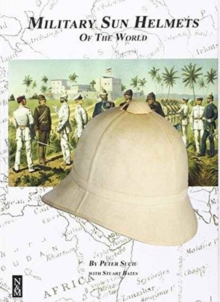 A new Naval and Military Press edition of this now classic book examines within its 100+ pages the history of these helmets, from the Indian Mutiny through to the modern day.

With nearly 200 colour photographs and illustrations, as well as dozens of period photographs, this is an essential guide for anyone interested in learning more about this form of military headgear, used around the world since the middle of the 19th century. The history of military sun helmets, often called"pith helmets" or "tropical helmets," is a subject that has rarely been covered this in-depth.

Much of the origin of these helmets has remained shrouded in mystery, yet these helmets, thanks to movies such as Zulu, The Bridge on the River Kwai and We Were Soldiers, are as iconic to their conflicts as the German or American steel helmets were to the World Wars.