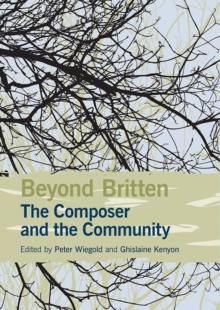 Beyond Britten: The Composer and the Community Hardback

With his Aspen award lecture (1964), Benjamin Britten expressed a unique commitment to community and place.

This book revisits this seminal lecture, but then uses it as a starting point of reflection, inviting leading composers, producers and writers to consider the role of the composer in the community in Britain in the last fifty years. Colin Matthews, Jonathan Reekie and John Barber reflect on Britten's aspirations as a composer and the impact of his legacy, and Gillian Moore surveys the ideals of composers since the 1960s.

Eugene Skeef and Tommy Pearson discuss the influence of the London Sinfonietta, while Katie Tearle reviews the tradition of community opera at Glyndebourne.

Nigel Osborne and Judith Webster explore the role of music as therapy, and James Redwood, Amoret Abis, Sean Gregory and Douglas Mitchell look at music in the classroom and creative workshops.

John Sloboda, Detta Danford and Natasha Zielazinski discuss collaboration in music-making and ways of facilitating exchanges between the composer and the audience, while Christopher Fox and Howard Skempton examine the role of modernism and the use of 'other', radical techniques to stimulate new dialogues between composer and community.

Peter Wiegold and Amoret Abis interview Sir Harrison Birtwistle, John Woolrich and Phillip Cashian, and Wiegold discusses his formative experiences in encountering music-making in other cultures. All of these approaches to the role and identity of the composer throw a different light on how we address 'the composer and the community': the varied, sometimes contradictory, motivations of composers; the role of music in 'enhancing lives'; the concept of 'outreach' and the different ways this is pursued; and, finally, the meaning of 'community'.

Underpinning each are genuine questions about the relationship of arts to society.

This book will appeal not only to composers, performers and practitioners of contemporary music but to anyone interested in the changes in twentieth-century music practice, music in education, and the role of music and the arts in the wider community and society. PETER WIEGOLD is a composer, conductor and the director of Club Inegales and the Institute of Composing.

He is a Research Professor of Music at Brunel University, and also director of the 'Brunel Institute for Contemporary Middle-Eastern Music' (BICMEM). GHISLAINE KENYON is an author, freelance arts education consultant and curator.