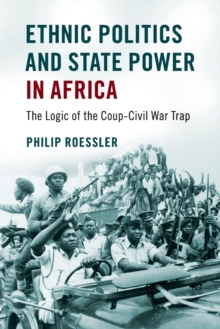 Ethnic Politics and State Power in Africa : The Logic of the Coup-Civil War Trap Paperback / softback

by Philip (College of William and Mary, Virginia) Roessler

Why are some African countries trapped in vicious cycles of ethnic exclusion and civil war, while others experience relative peace?

In this groundbreaking book, Philip Roessler addresses this question.

How rulers respond to this strategic trade-off is shown to be a function of their country's ethnic geography and the distribution of threat capabilities it produces.

Moving between in-depth case studies of Sudan and the Democratic Republic of the Congo based on years of field work and statistical analyses of powersharing, coups and civil war across sub-Saharan Africa, the book serves as an exemplar of the benefits of mixed methods research for theory-building and testing in comparative politics.