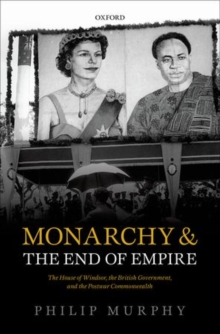 Monarchy and the End of Empire : The House of Windsor, the British Government, and the Postwar Commonwealth Hardback

By the early twentieth century it was becoming clear that the Empire was falling apart. The British government promoted the Crown as a counterbalance to the forces drawing the Empire apart, but when India declared their intent to become a republic in the late 1940s, Britain had to accept that allegiance to the Crown could no longer be the common factor binding the Commonwealth together.

Monarchy and the End of Empire provides a unique insight on the triangular relationship between the British government, the Palace, and the modern Commonwealth since 1945. In the years of rapid decolonization which followed 1945 it became clear that this elaborate constitutional infrastructure posed significant problems for British foreign policy.

Not only did it offer opportunities for the monarch to act without ministerial advice, it also tied the British government to what many within the UK had begun to regard as a largely redundant institution.

Philip Murphy employs a large amount of previously-unpublished documentary evidence to argue that the monarchy'srelationship with the Commonwealth, initially promoted by the UK as a means of strengthening Imperial ties, had increasingly become an impediment to British foreign policy.