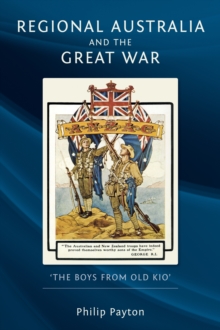 Regional Australia and the Great War : 'The Boys from Old Kio' Paperback / softback

In this book, Philip Payton provides a vivid insight into the experiences of regional Australia during the Great War of 1914-18. Alighting upon 'old Kio', the copper-mining communities of South Australia's northern Yorke Peninsula, he describes the relationship between the 'homefront' and the 'battlefront' half-a-world away. He draws an intimate portrait of Australia at war, from the lives (and deaths) of local soldiers-all volunteers-in the trenches far from home to the myriad reactions and activities of those in a community struggling to grasp the enormity of the situation in which it found itself.

The book shows how community cohesion was fractured by increasing tensions and divisions, not least over the Conscription debate, as the war dragged on. And it shows how those volunteer soldiers fared in each of the great battles in which the Australians participated-from Gallipoli to the Western Front and the heady days of 1918.