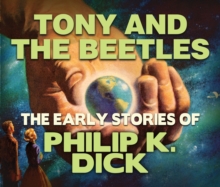 Tony and the Beetles eAudiobook MP3

In Tony and the Beetles, ten-year old Tony Rossi, an Earthman growing up on Betelgeuse, becomes aware that the natives, known as the Pas-Udeti, are driving out the Earthmen colonists on nearby Orion.

His father, a staunch believer in the superiority of Earthmen, describes Tony's native friends as Beetles.

A trip into town to meet his native friends leads to awkward encounters with a Pas-Udeti cab driver and a fellow bus passenger.

When his newly aggressive Pas-Udeti friends rebuke him, Tony realizes that being born in a place doesn't necessarily mean you are welcome there.