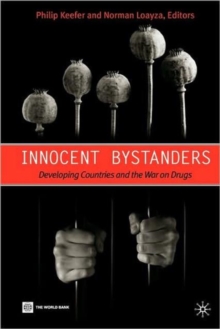 The evidence presented in this volume is that these consequences are high in the case of current drug policies, particularly for poor transit and producer countries.

These costs include the deaths of thousands in the conflict between drug cartels and security forces, political instability, and the infiltration of criminal elements into governments, on the one hand; and increased narcotics use in countries that would not otherwise have been targeted by drug suppliers.

Despite such costs, extreme policies could be worthwhile if their benefits were significantly higher than those of more moderate, less costly policies.

The authors review the evidence on the benefits of current policies and find that they are clouded in uncertainty: eradication appears to have no permanent effect on supply; the evidence on criminalization does not exclude either the possibility that its effects on drug consumption are low, or that they are high. Uncertainty over benefits and the high costs of current policies relative to alternatives justifies greater emphasis on lower cost policies and more conscientious and better-funded efforts to assess the benefits of all policies.