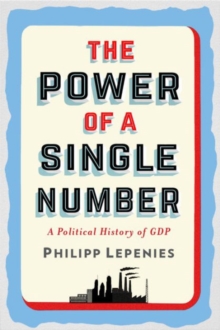 The Power of a Single Number : A Political History of GDP Hardback

Widely used since the mid-twentieth century, GDP (gross domestic product) has become the world's most powerful statistical indicator of national development and progress.

Practically all governments adhere to the idea that GDP growth is a primary economic target, and while criticism of this measure has grown, neither its champions nor its detractors deny its central importance in our political culture. In The Power of a Single Number, Philipp Lepenies recounts the lively history of GDP's political acceptance-and eventual dominance.

Locating the origins of GDP measurements in Renaissance England, Lepenies explores the social and political factors that originally hindered its use.

It was not until the early 1900s that an ingenuous lone-wolf economist revived and honed GDP's statistical approach.

These ideas were then extended by John Maynard Keynes, and a more focused study of national income was born.

American economists furthered this work by emphasizing GDP's ties to social well-being, setting the stage for its ascent.

GDP finally achieved its singular status during World War II, assuming the importance it retains today. Lepenies's absorbing account helps us understand the personalities and popular events that propelled GDP to supremacy and clarifies current debates over the wisdom of the number's rule.