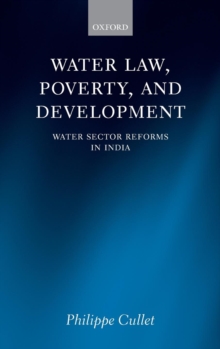 This monograph comprehensively examines water law regulations and reform in the present decade, going beyond a simple analysis of existing water law and regulations to encompass environmental, social, economic, and human rights aspects of water as a natural resource. Using the specific case of India and on the related international law and policy framework that directly influences water regulatory developments in India, this book offers what will be the first and only analysis of water law reforms taking place at the national level in many developing countries in their domestic and international context.

On the one hand, international freshwater law remains under-developed and existing legal instruments such as the 1997 UN Convention only address a limitedset of relevant issues.

Yet, the international law and policy framework concerning freshwater is increasingly important in shaping up law reforms taking place at the national level, in particular in developing countries.

Indeed, non-binding resolutions such as the Dublin Statement on Water andSustainable Development (1992) have had an immense influence on water law reforms in most developing countries. This book seeks to conceive of and analyse freshwater regulation in a broader context, and go beyond a literature that either lauds or criticises ongoing water sector reforms to provide an analytical basis for the reforms which all countries will have to adopt in the near or medium-term future.