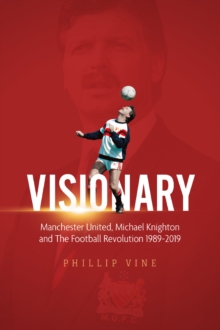 Michael Knighton is one of the most notable football entrepreneurs of his generation.

Thirty years ago he arrived on the scene at Manchester United, bearing the revolutionary gift of ideas for the transformation of the club's fortunes.

Visionary tells the inside story of his time at Old Trafford - a crucial, incendiary era in United's history.

Knighton is popularly known as the man who very nearly bought Manchester United for the giveaway price of GBP10 million.

Ultimately, he spurned the opportunity to complete the purchase, opting instead to join the board and watch as his radical ideas for a commercial revolution were put into action.

Visionary argues the case for Knighton as the architect of the richest football club and greatest sporting brand on the planet - and that it was Knighton's unacknowledged axis with Alex Ferguson that enabled a paradigm shift in United's fortunes on the field of play, leading to unparalleled glories.

Sam Wallace of the Daily Telegraph called Michael's tale 'one of the great football stories of our time'.