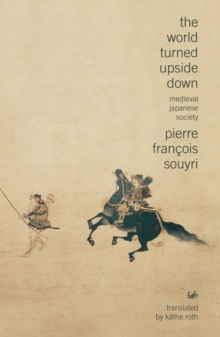 In the late twelfth century, Japanese people called the transitional period in which they were living the 'age of warriors'.

Feudal clans fought civil wars, and warriors from the Kanto Plain rose up to restore the military regime of their shogun, Yoritomo.

In this remarkable portrait of a complex period in the evolution of Japan, Pierre F.

Souyri uses a wide variety of sources - ranging from legal and historical texts to artistic and literary examples - to form a magisterial overview of medieval Japanese society.

As much at home discussing the implications of the morality and mentality of The Tale of the Heike as he is describing local disputes among minor vassals or the economic implications of the pirate trade, Souyri brilliantly illustrates the interconnected nature of medieval Japanese culture.

The Middle Ages was a decisive time in Japan's history because it confirmed the country's national identity. New forms of cultural expression, such as poetry, theatre, garden design, the tea ceremony, flower arranging and illustrated scrolls, conveyed a unique sensibility - sometimes in opposition to the earlier Chinese models followed by the old nobility.

The World Turned Upside Down provides an animated account of the religious, intellectual and literary practices of medieval Japan in order to reveal the era's own notable cultural creativity and enormous economic potential.