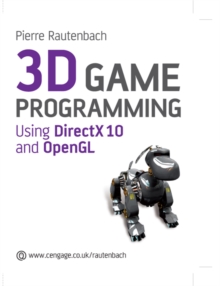 by Pierre (University of Pretoria) Rautenbach

3D Game Programming focuses on all the elements making up a 3-D first-person shooter game engine using a bottom-up approach.

By following the easy-to-read text, the reader will learn how to create his or her own next-generation 3-D game engine with support for vertex and pixel shading GPU techniques (via Cg and HLSL), dynamic lighting and shadowing (via stencil shadow volumes), geometric meshes, audio, artificial intelligence, physics, environmental reflections, refraction and advanced lighting techniques such as High Dynamic Range lighting. Dealing with the cross-platform programming of 3-D Games for both Linux/MacOS X (via OpenGL/GLUT) and Windows (via DirectX 10 or OpenGL/GLUT) platforms, this book bridges an existent rift in the game development community.

In addition to covering these APIs in-depth, the reader is also introduced to other game programming topics such as game development techniques and methodologies, particle systems, shader-based special effects, physics-based animation and artificial intelligence, making this the most comprehensive game programming guide around.