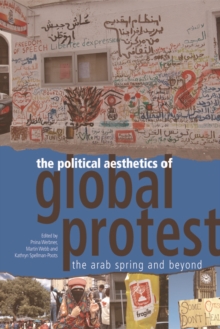 The Political Aesthetics of Global Protest : The Arab Spring and Beyond Hardback

From Egypt to India, and from Botswana to London, worker, youth and middle class rebellions have taken on the political and bureaucratic status quo and the privilege of small, wealthy and often corrupt elites at a time when the majority can no longer earn a decent wage.

A remarkable feature of the protests from the Arab Spring onwards has been the salience of images, songs, videos, humour, satire and dramatic performances.

This book explores the central role the aesthetic played in energising the mass mobilisations of young people, the disaffected, the middle classes, the apolitical silent majority, as well as enabling solidarities and alliances among democrats, workers, trade unions, civil rights activists and opposition parties.

Comparing the North African and Middle Eastern uprisings with protest movements such as Occupy, the authors bring to bear an anthropological and sociological approach from a variety of perspectives, illuminating the debate by drawing on a wide array of disciplinary expertise.

Case studies include > Protests about regime change in Tunisia, Egypt, Syria, Libya, Bahrain, Yemen and Russia> Corruption in India> The demise of the welfare state in Spain, Israel and Greece> The living wage in Botswana and Wisconsin> The financial crisis and corporate greed and the Occupy movement in British and American cities