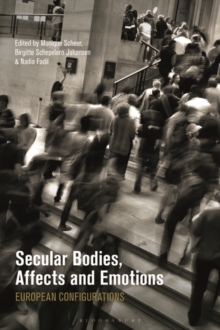 Taking its cue from the study of 'lived religion', Secular Bodies, Affects and Emotions shows how the idea of a secular public is equally marked by a display and cultivation of affect and emotions.

Whereas it is widely agreed that religion is often saturated by emotion, the secular is usually treated as a neutral background serving as the domain of public, rational deliberation.

This book demonstrates that secularity and secularism are also upheld by bodily practices and emotional attachments. Drawing on empirical case studies, this is the first book to ask and explore whether a secular body exists.

Building on the work of Talal Asad, the book argues that the secular is not an absence of religion, but a positive entity that comes about through its co-constitutive relationship with religion. And, once we attune ourselves to recognizing its operations as grammar which structures social practice, writing an anthropology of the secular could become a new possibility.