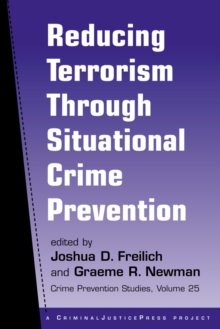 This volume applies the principles of situational crime prevention (SCP) to terrorism and it features cutting-edge theoretical and empirical pieces.

Chapters focus on: terrorism by right-wing and left-wing extremists in the U.S., the conflicts in Iraq and Northern Ireland, foreign policy through an SCP lens, intelligence-led policing, the crimes of kidnapping and hostage taking, ideologically motivated tax refusal and cybercrime.

Sources of original data include research projects such as the government-funded American Terrorism Study, and the U.S.

The authors represent a mix of leading SCP scholars and noted terrorism researchers.