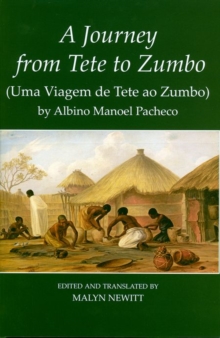 'A Journey from Tete to Zumbo' by Albino Manoel Pacheco Hardback

Albino Manoel Pacheco was sent in 1861-2 to re-establish the Portuguese settlement at Zumbo at a time when Livingstone's Zambesi Expedition was still very active in the region.

He wrote an account of his expedition which has long been recognised to be of exceptional importance, though it can only be found in obscure 19th century publications.

In it he gives the first detailed description of the activities of the African spirit mediums and records the traditionalhistory of the 'empire' of the Monomotapas.

He also gives a history of the Zumbo settlement which draws on the traditions of the Africans of the area.

Pacheco's text is exceptional in the extent to which he made use of African oral tradition and, although it is less well known than Gamitto's King Kazembeit is just as important for an understanding of African society on the eve of the 'scramble'.

This edition and translation makes Pacheco's account fully available for Portuguese and English readers for the first time.