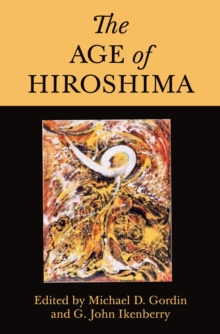 The Age of Hiroshima Hardback

A multifaceted portrait of the Hiroshima bombing and its many legaciesOn August 6, 1945, in the waning days of World War II, the United States dropped an atomic bomb on the Japanese city of Hiroshima.

The city's destruction stands as a powerful symbol of nuclear annihilation, but it has also shaped how we think about war and peace, the past and the present, and science and ethics.

The Age of Hiroshima traces these complex legacies, exploring how the meanings of Hiroshima have reverberated across the decades and around the world. Michael D. Gordin and G. John Ikenberry bring together leading scholars from disciplines ranging from international relations and political theory to cultural history and science and technology studies, who together provide new perspectives on Hiroshima as both a historical event and a cultural phenomenon.

As an event, Hiroshima emerges in the flow of decisions and hard choices surrounding the bombing and its aftermath.

As a phenomenon, it marked a revolution in science, politics, and the human imagination-the end of one age and the dawn of another. The Age of Hiroshima reveals how the bombing of Hiroshima gave rise to new conceptions of our world and its precarious interconnectedness, and how we continue to live in its dangerous shadow today.