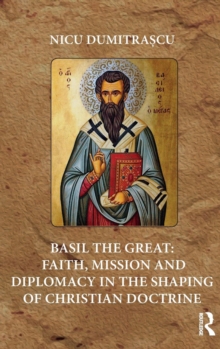 Basil the Great: Faith, Mission and Diplomacy in the Shaping of Christian Doctrine Hardback

Regarded as one of the three hierarchs or pillars of orthodoxy along with Gregory of Nazianzus and John Chrysostom, Basil is a key figure in the formative process of Christianity in the fourth century.

While his role in establishing Trinitarian terminology, as well as his function in shaping monasticism, his social thought and even his contribution to the evolution of liturgical forms have been the focus of research for many years, there are few studies which centre on his political thought.

Basil played a major role in the political and religious life between Cappadocia and Armenia and was a key figure in the tumultuous relationship between Church and State in Late Antiquity.

He was a great religious leader and a gifted diplomat, and developed a 'special relationship' with Emperor Valens and other high imperial officials.