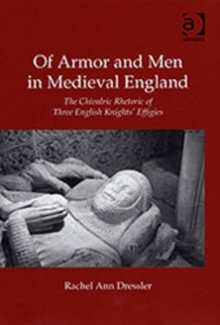 Of Armor and Men in Medieval England : The Chivalric Rhetoric of Three English Knights' Effigies Hardback

Despite the profusion of knightly effigies created between c. 1240 and c. 1330 for tombs throughout the British Isles, these commemorative figures are relatively unknown to art historians and medievalists. Until now, their rich visual impact and significance has been relatively unexplored by scholars. In this study, Rachel Dressler examines this category of sculpture, illustrating how English military figures employ a visual language of pose, costume, and attributes to construct a masculine ideal that privileges fighting prowess, elite status, and sexual virility. Like military figures on the Continent, English effigies represent knights wearing chain mail and surcoats, and bearing shields and swords; unique to the British examples, however, is the display of an aggressive sword handling pose and dynamically crossed legs. Outwardly hyper masculine, the carved figures partake in artistic subterfuge: the lives of those memorialized did not always match proffered images, testifying to the changing function of the knight in England during the thirteenth and early fourteenth centuries. This study traces the development of English military figures, and analyzes in detail three fourteenth-century examples-those commemorating Robert I De Vere in Hatfield Broad Oak (Essex), Richard Gyvernay at Limington (Somerset), and Henry Allard in Winchelsea (Sussex). Similar in appearance, these three sculptures represent persons of distinctly different social levels: De Vere belonged to the highest aristocratic rank, where Gyvernay was a lesser county knight, and Allard was from a merchant family, raising questions about his knightly standing. Ultimately, Dressler's analysis of English knight effigies demonstrates that the masculine warrior during the late Middle Ages was frequently a constructed ideal rather than a lived experience.