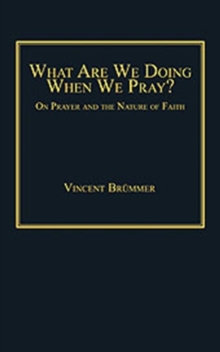 What Are We Doing When We Pray? : On Prayer and the Nature of Faith Hardback

Vincent BrA1/4mmer's classic book on prayer from 1984 provides a comprehensive philosophical analysis of central issues regarding the nature and practice of prayer.

What do we do when we ask things of other people, when we thank them or praise them, when we express penitence for what we have done to them and ask their forgiveness? And how does doing these things in relation to God differ from when we do them in relation to other people? And what does this entail for the existence and nature of the God to whom we pray? This new edition has been substantially revised and updated.

Three new chapters have been added which develop in detail a hint by G.K.

These chapters contribute significantly to the current academic interest in spirituality by showing how BrA1/4mmer's analysis of prayer helps us to understand the nature of spirituality, of faith and religious belief, and of theology.

Spirituality is not aimed at achieving religious 'experiences' or mystical 'knowledge' about God; it is primarily aimed at attaining the religious form of life and at coming to see the world in the light of faith.

Religious belief is not merely a cognitive enterprise like science; it cannot be divorced from spirituality and the life of faith, and is therefore fundamentally existential and not merely intellectual. Serving as a valuable core text for students, this book also contributes to a number of current debates in theology and philosophy of religion: the debates on realism and religious belief, on the rationality of faith and the nature of theology, on the relation between religious belief and morality, on the relation between science and religion and the lively debate among evangelical Christians in America on the 'openness of God.'