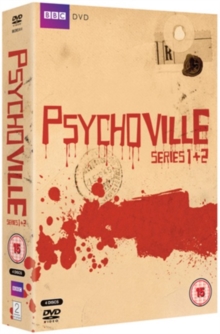 All 14 episodes from the first two series' of the award-winning BBC comedy from the creators of 'The League of Gentlemen'.

In series one, a bizarre chain of events is triggered when an anonymous writer sends black-edged letters to five seemingly disparate characters containing the chilling message: 'I know what you did'.

One of their number has been killed, and new mysteries are set to emerge.

Also included is the 2010 'Hallowe'en Special' of the show.