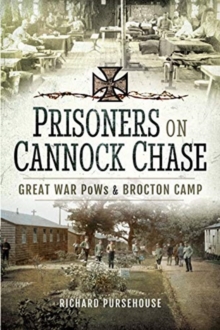 Over the course of many years Richard Pursehouse has painstakingly unravelled the story of a First World War prisoner of war camp which held captured German personnel in the very heart of the English countryside. He first became aware of the existence of the camp while walking over Cannock Chase in Staffordshire, finding sewer covers in what appeared to be uninhabited heathland.

Intrigued, the author set out to investigate the mystery and discovered that the sewers were for two Army camps - Brocton and Rugeley - that had been constructed for soldiers training during the First World War.

What he also found, however, was that the Brocton Camp site also included a segregated autonomous prisoner of war camp. With the aid of an old postcard, Richard was able to identify the exact location and layout of the long-lost camp.

His research continued until he had accumulated an enormous amount of detail about the camp and life for its prisoners.

He found a file by the Camp Commandant, Swiss Legation correspondence, stories in newspapers, letters and diaries, and received photographs from interested individuals.

Amongst his finds was a box holding scores of fascinating letters sent home by an administration clerk while he was working at the camp. During his investigations, Richard also learned of attempted murders and escapes (including the only escapee to make it back to Germany), deaths, thefts - and a fatal scandal.

The letters, documents and diaries reveal how the prisoners coped with incarceration, as well as their treatment, both in terms of camp conditions and their medical needs. He has also established a definitive answer to the 'myth' that some of the prisoners assisted in building the nearby Messines terrain model.

The model was a post-battle training tool to instruct newly-arrived New Zealand troops, which also provided a visual explanation of how they had defeated the Germans in the Battle of Messines in June 1917. The result is a unique insight into what life was like inside a British Prisoner of War camp during the First World War.