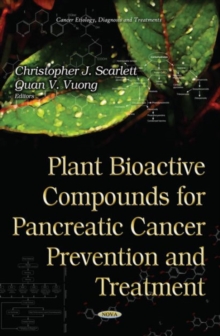 With the rapid advancements in medical research, diagnostic technology and increased public health initiative and awareness, overall cancer death rates in western societies are declining each year with the number of deaths from major cancers such as breast, colorectal and lung following this trend.

However, the survival rate for those with pancreatic cancer has been at a standstill for over four decades and there are concerns that pancreatic cancer may become the second deadliest cancer in the US by the year 2030.

The diagnosis of pancreatic cancer has dire consequences as it presents late in its course and is rapidly progressive.

This is clearly one of the most devastating of human cancers, and as there are very few treatment options for those with the disease, new approaches and novel therapeutic strategies are urgently required.

For thousands of years, plants have been used as traditional indigenous remedies for a variety of ailments in many parts of the world.

It is thought that approximately 80% of the rural population worldwide still relies on plants as medicines.

Plants have assumed the greatest prominence as a source of medicinal compounds with thousands of species associated with the treatment of cancers or conditions with cancer-like symptoms.

Scientific evaluation of a range of traditional medicines has led to the development of highly effective cancer therapeutic agents, and it is estimated that approximately 50% of all pharmaceuticals currently available for administration are still derived from natural origins.

With this in mind, within the plant kingdom there remains great potential for the development of novel therapeutic agents with significant efficacy against pancreatic cancer.

With our increasing understanding of the molecular pathology of pancreatic cancer and the rapid advancement of DNA sequencing technology to understand the structure of the genome and infer biology, pancreatic cancer is one of the most appropriate diseases to test multiple novel plant derived therapeutics in a molecular phenotype driven personalised approach.