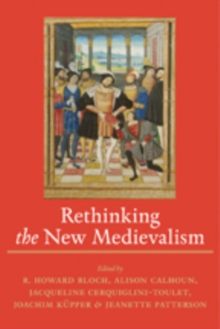 In the early 1990s, Stephen Nichols introduced the term "new medievalism" to describe an alternative to the traditional philological approach to the study of the romantic texts in the medieval period.

While the old approach focused on formal aspects of language, this new approach was historicist and moved beyond a narrow focus on language to examine the broader social and cultural contexts in which literary works were composed and disseminated.

Within the field, this transformation of medieval studies was as important as the genetic revolution to the study of biology and has had an enormous influence on the study of medieval literature. Rethinking the New Medievalism offers both a historical account of the movement and its achievements while indicating - in Nichols' innovative spirit - still newer directions for medieval studies.

The essays deal with questions of authorship, theology, and material philology and are written by members of a wide philological and critical circle that Nichols nourished for forty years.

Daniel Heller-Roazen's essay, for example, demonstrates the conjunction of the old philology and the new. In a close examination of the history of the words used for maritime raiders from Ancient Greece to the present (pirate, plunderer, bandit), Roazen draws a fine line between lawlessness and lawfulness, between judicial action and war, between war and public policy.