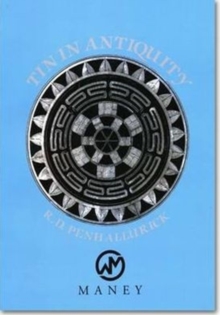 Tin in Antiquity : Its Mining and Trade Throughout the Ancient World with Particular Reference to Cornwall Paperback / softback

Tin in Antiquity is the first comprehensive history of the early metallurgy of tin, a mine of information on this rare, highly prized metal so vital to the developing civilization of the Bronze Age.

The origins of tin have always been a mystery, but the author has unearthed archaeological evidence from all over the world to trace the tinfields used before the discovery of European deposits.

He takes us on a fascinating voyage of discovery through the Ancient World, delving into mythology, and enlivening his scholarly text with quotations from the Classics and humorous anecdotes. As his name suggests, Roger Penhallurick's roots are deep in Cornwall - formerly the world's largest tin producer, and still the greatest in Europe.

So it is fitting that the Cornish section comprises almost half the book, for the first time collecting together all the evidence for tin streaming between 2000 BC and AD 1000.

All surviving artifacts recovered from the tin workings are illustrated and put in their archaeological context.

The book is lavishly illustrated throughout, including many rare old photos, and has a full bibliography of the wealth of sources that have contributed to this work.