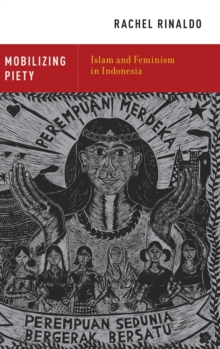 Islam and feminism are often thought of as incompatible.

Through a vivid ethnography of Muslim and secular women activists in Jakarta, Indonesia, Rachel Rinaldo shows that this is not always the case.

Examining a feminist NGO, Muslim women's organizations, and a Muslim political party, Rinaldo reveals that democratization and the Islamic revival in Indonesia are shaping new forms of personal and political agency for women.

These unexpected kinds of agency draw ondifferent approaches to interpreting religious texts and facilitate different repertoires of collective action - one oriented toward rights and equality, the other toward more public moral regulation.

As Islam becomes a primary source of meaning and identity in Indonesia, some women activists draw onIslam to argue for women's empowerment and equality, while others use Islam to advocate for a more Islamic nation.

Mobilizing Piety demonstrates that religious and feminist agency can coexist and even overlap, often in creative ways. "Rachel Rinaldo gives us a richly documented and path-breaking study of how Muslim women in Indonesia draw on both Islam and feminism to argue and imagine political and social changes. Her findings go against a pervasive view of the incompatibility of Islam and feminism: she finds that these very diverse global discourses can in fact work together towards desirable political outcomes."-Saskia Sassen, Columbia University, and author of A Sociology of Globalization"This original study conducted in the world's largest Muslim-majority country strikes me as one of the most interesting and important works on Islam and women in recent years.

Rather than pit secularists against religious-minded activists in debates over women's rights, Rachel Rinaldo shows that the major divide in contemporary Indonesia - as in much of the Muslim world - is more complex, and centers on struggles over what it means to be a Muslim, a woman, and an Indonesian."-Robert Hefner,Professor of Anthropology, Boston University