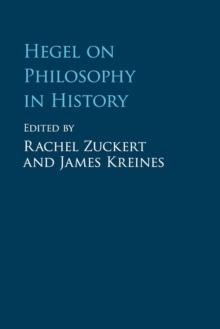 Hegelian doctrines discussed include the purported end of art, Hegel's view of human history, including the history of philosophy as the history of freedom (or autonomy), and the nature of self-consciousness as realized in narrative or in action.

Hegel scholars Rolf-Peter Horstmann, Sally Sedgwick, Terry Pinkard, and Paul Redding attempt to vindicate some of Hegel's claims concerning historical philosophical progress, while others such as Robert Stern, Christoph Menke, and Jay Bernstein suggest that Hegel either did not conceive of philosophy as progressing unidirectionally or did not make good on his claims to progress: perhaps we should still be Aristotelians in ethics, or perhaps we are still torn between sensibility and reason, or between individuality and social norms.

Perhaps capitalism has exacerbated such problems.