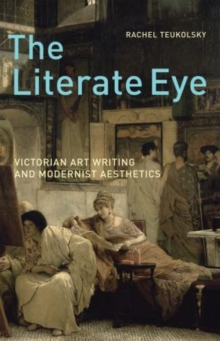 In Victorian Britain, authors produced a luminous and influential body of writings about the visual arts.

From John Ruskin's five-volume celebration of J. M.W. Turner to Walter Pater's essays on the Italian Renaissance, Victorian writers disseminated a new idea in the nineteenth century, that art spectatorship could provide one of the most intense and meaningful forms of human experience. In The Literate Eye, Rachel Teukolsky analyzes the vivid archive of Victorian art writing to reveal the key role played by nineteenth-century authors in the rise of modernist aesthetics.

Though traditional accounts locate a break between Victorian values and the experimental styles of the twentieth century, Teukolsky traces how certain art writers promoted a formalism that would come to dominate canons of twentieth-century art.

Spanning the years 1840 to 1910, her argument lends a new understanding to the transition from Victorianism to modernism, a periodof especially lively exchange between artists and intellectuals, here narrated with careful attention to the historical particularities and real events that informed British aesthetic values. Lavishly illustrated and marked by meticulous research, The Literate Eye offers an eloquent argument for the influence of Victorian art culture on the museum worlds of modernism, in a revisionary account that ultimately relocates the notion of "the modern" to the heart of the nineteenth century.