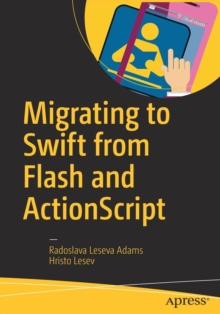 Migrating to Swift from Flash and ActionScript Paperback / softback

Build on your knowledge of ActionScript to take the fast track developing iOS apps with Apple's latest language, Swift.

Swift's syntax is easier to understand than Objective-C for people already familiar with ActionScript.

At the same time it offers a number of new features and richer expressiveness than both ActionScript and Objective-C. Switching to a new platform usually involves migration on three levels: tools, workflow, and programming language.

This book is structured as a guide that will help you on each level with step-by-step tutorials.

Apart from the tutorials, it comes with recipes for some of the most popular mobile development topics: social network integration and messaging, taking advantage of device capabilities, networking and working with local and iCloud data, advertising in your app or game, and 2D and 3D graphics.

The book also includes a final chapter that takes you through Apple's App Store submission process.

Don't just build your apps, sell them. What You Will Learn:Expand your development knowledge to native iOS programming with SwiftUse the latest Xcode 7 IDEMigrate your existing ActionScript projects to Swift Create advanced UI, leverage the device hardware, integrate with social networks, take advantage of 2D and 3D graphicsDiagnose your app quickly with Xcode's debugger and instrumentsPrepare and submit our iOS app in Apple's App StoreWho This Book is For:Migrating to Swift from Flash and ActionScript is for Flash and Adobe AIR developers who want to move on to native iOS programming with the latest Apple Swift language.

It's for the seasoned ActionScript programmer who is looking to add another language and platform to their tool belt quickly.

Migrating to Swift from Flash and ActionScript is a good choice for developers who learn by doing and don't have time to read thick manuals and books for beginners in order to start programming in a new language. 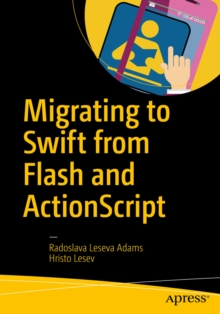 Migrating to Swift from Flash and...