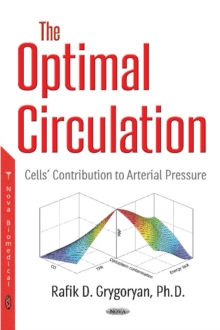 Prevailing physiological concepts (PPC) of blood circulation consider the cardiovascular system (CVS) an autonomous system that has its own goal and mechanisms for achieving it.

However, PPCs are incapable of explaining the causes of long-term shifts of an MAPs rest level.

In particular, this affects current understanding and cure technologies of arterial hypertension (AH).

Considering AH as a disease, physicians seek a cure that effectively decreases the elevated pressure.

This gave rise to the palliative cure softening of AH symptoms without an understanding of AHs primary causes.

These limitations of PPC are forced to seek a circulations extended physiological theory (EPT), explaining the mechanisms of both normal and altered MAPs.

In the EPT presented in the book, CVS is considered a constituent part of a more complex functional super-system (FSS) that appeared in a multi-cellular animal organism during the co-evolution of specialized cells.

The general goal of the FSS is to provide optimal physiochemical and energy states of the cell cytoplasm.

To achieve this goal under a stochastic total and local variations of cells activity, FSS should control: i) The cardiac output; ii) the regional and local blood flows; and iii) the chemical composition of both arterial and venous blood.

Under chronic energy shortage, FSS should also provide an adequate increasing of ATP-synthesis in mitochondria of stagnated cells.

So, under the ineffectiveness of current mitochondria, FSS must enrich the arterial blood by chemicals providing the biogenesis of mitochondria.

However, neither the energy providers nor the providers of blood chemistry are properly involved in PC of the blood circulation.

The EPT for the first time integrates the hemodynamic and metabolic aspects of cell life at the organism scale.

It is proved that the CVS activity is inversely associated with the activity mechanisms controlling the rates of both pulmonary ventilation and erythropoiesis.

The activity of FSS mechanisms forming the chemical composition of arterial and venous blood is in reciprocal relationships with the function of CVS.

So, the EPT associates the function of CVS with energy and metabolic problems in cells.

The EPT concerns both traditional and additional determinants of the MAP level.

It is proved that stochastic combinations of these determinants force the MAP level to float.

In particular, both the mitochondrial insufficiency and the chemical contamination of cytoplasm are capable of causing AH.

The normal arterial pressure is always individual. Before correcting the altered arterial pressure, a complex medical examination for ascertaining the mitochondrial function, the status of the FSS mechanisms is recommended.

The diagnosis of AH should be reoriented for detecting cellular abnormalities.

The therapy of AH should be targeted at finding strategies for the optimizing the entire FSS function.