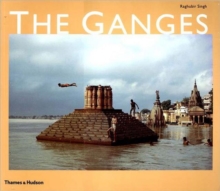 India is not simply a place; it is an experience. And the Ganges is not just a river: it is an aspect of the Divine.

This is Raghubir Singh's personal pilgrimage along the Ganges: from the Himalayas, where the river rises among snows, through the villages of the Gangetic Plain, past Banaras and through Bihar, to the Bay of Bengal, between India and Bangladesh.

On the way he captures the essence of the river's many different stages and moods, its strange and stunning beauty, its turbulence and ferocity during the monsoon, and the intimate daily lives of the people who live along it.

He shows the river's powerful religious significance, attested by the millions of Hindus who take part in the ageless pilgrimages and festivals held on its banks.

Singh's camera is as fine-tuned as his sensibility. To read his introductions to each area or aspect of the Ganges and then to look at these fascinating and infinitely various photographs is to see that what he notices with his mind he can catch to an amazing degree in a visual image.

In these pictures there is more than the conventionally beautiful; in them we are brought face to face with Loknadi, the river of the world.