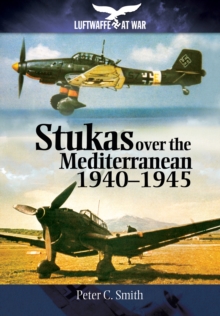 Stukas Over the Mediterranean, 1940 1945 Paperback / softback

This enthralling pictorial guide reveals the formidable power of one of the most feared warplanes of all time.

It was a primary weapon of German Blitzkrieg tactics and the concept of lightning warfare.

Together with the panzer, it transformed air and land warfare, with countries falling in days and weeks, rather than after campaigns lasting years.

With more than 100 photographs and detailed commentary, Stukas over the Mediterranean examines the role of German and Italian Ju 87s in such diverse campaigns as the attack on Yugoslavia, the battle for Crete and operations by the night flying squadrons.