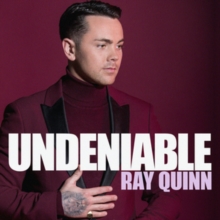 'Undeniable' is the former X Factor runner-up's first release in over 13 years. The 10-track album includes 2 original songs, the single 'They Say Love' and 'Smile' as well as covers of some of Ray's favourite songs. Ray has put his own spin on legendary classics by the likes of Matt Monro, Ella Fitzgerald, Christopher Cross and Duffy. The album was recorded in Ray's hometown at Liverpool's prestigious Parr Street Studios and is backed by a live orchestra. Speaking of the album, Ray said 'The theme is classic songs, sung by some of my favourite singers, all backed with some of the best musicians from around the UK. Ever since I was a little boy, I grew up listening to the finest artists in entertainment. Frank Sinatra, Dean Martin, Sammy Davis Jnr, Elvis Presley to name a few. These artists and many like them paved the way when it came to music changing the world.' The album was inspired by the overwhelming response and welcome Ray received when performing 'From Russia With Love' at a show last year; he realised immediately that he wanted to make an album of songs that carried an everlasting legacy, intertwined with his own journey and his roots in Liverpool.