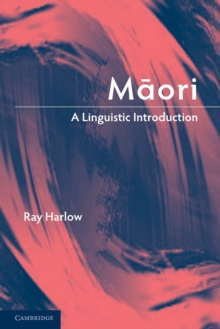 Maori, the indigenous language of New Zealand, is an endangered, minority language, with an important role in the culture and identity of the Maori community.

This comprehensive overview looks at all aspects of the Maori language: its history, its dialects, its sounds and grammar, its current status and the efforts being made by the Maori community and the state to ensure its survival.

Central chapters provide an overall sketch of the structure of Maori while highlighting those aspects which have been the subject of detailed linguistic analysis - particularly phonology (sound structure) and morphology (word structure).

Though addressed primarily to those with some knowledge of linguistics, this book describes a language with a wealth of interesting features.

It will interest anyone wishing to study the structure of a minority language, in fields as diverse as typology, sociolinguistics and linguistic anthropology, as well as all those interested in endangered languages and their preservation.