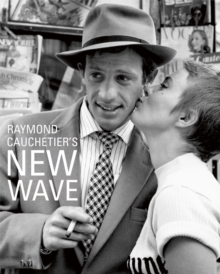 They were radical, artistic, original and most importantly set up the director as a creative genius; at the forefront were Francois Truffaut and Jean-Luc Godard.

Today these films are credited with changing cinema forever.

For many film goers they command strong and passionate respect and became the foundations on which a lifetime of cinema-going is built. In the photographs of Raymond Cauchetier we bear witness to the great artistic genius that was central to the process of making these films.

Cauchetier's photographs are a culturally important documentary of the director at work, his methods and processes.

His photographs capture some of the most memorable moments in film; Jean-Paul Belmondo and Jean Seberg on the Champs Elysees in A bout de souffle, Jeanne Moreau in the race scene of Jules et Jim, Anna Karina in a Parisian Cafe in Une femme est une femme. But Cauchetier's genius lies also in the fact that his photographs are far above just a visual record of these films.They clearly show the same spirit, the same freedom and the same originality that made The New Wave so important. Cauchetier's photographs are as much a part of The New Wave as the films themselves.

In the words of Richard Brody: In these images, Raymond Cauchetier, a witness to art, made art by bearing true witness. This is the first book published in English featuring the New Wave film photographs of Raymond Cauchetier.