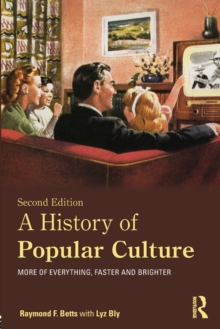 A History of Popular Culture : More of Everything, Faster and Brighter Paperback / softback

This lively and informative survey provides a thematic global history of popular culture focusing on the period since the end of the Second World War. A History of Popular Culture explores the rapid diffusion and 'hybridization' of popular culture as the result of three conditions of the world since the end of World War Two: instantaneous communications, widespread consumption in a market-based economy and the visualization of reality.

Betts considers the dominance of American entertainment media and habits of consumption, assessing adaptation and negative reactions to this influence.

The author surveys a wide range of topics, including:the emergence and conditions of modern popular culture the effects of global conflict the phenomenon and effects of urbanization the changing demography of the political arena and the work place the development of contemporary music culture film, television and visual experience the growth of sport as a commercial enterprise. Now updated, by Lyz Bly, to include major developments such as blogs and social networks, YouTube.com, and enhanced technologies such as the iPhone, iPod, and iPad as well as the way in which the internet has reshaped the ways we consume media.

The book provides an engaging introduction to this pervasive and ever-changing subject.