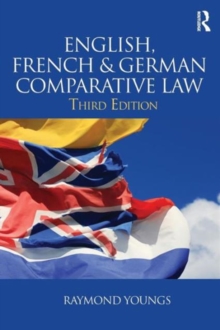 This comparative analysis considers the differing approaches to important areas of law in England, France and Germany.

In particular, constitutions, sources of law, rights against the state to prevent abuse of power, and rights of private individuals and organisations against each other in tort and contract are examined and compared, and the system of courts is also considered. Updated and revised, each sub-topic is introduced with the relevant material in the English system, allowing easy comparison and assimilation of the other systems.

The text includes translations of relevant French and German codal material, and references to relevant cases from all of the jurisdictions.

This new edition includes constitutional changes in France and the United Kingdom, in particular the new procedure for challenging existing legislation before the Conseil constitutionnel.

It examines the consequences of the Lisbon Treaty, as well as other recent codal and legislative changes.

Comprehensive and topical, the text explores a wide variety of new case law on issues such as: preventive detention; the use of evidence obtained by torture; the balance between suppression of terrorism and personal freedom; the internet; email monitoring; artificial reproductive techniques; use of global positioning systems (GPSs), deoxyribonucleic acid (DNA) and closed-circuit television (CCTV); the wearing of religious clothing (such as the headscarf) and symbols (such as the cross); circumcision; methods of crowd control; the prevention of human trafficking; the preservation of privacy, especially for celebrities; and the legality of pre-nuptial agreements and success fees for lawyers. Designed for students on comparative law courses, this textbook will also prove valuable to students who are familiar with English law, but require a readily comprehensible introduction to French or German law.