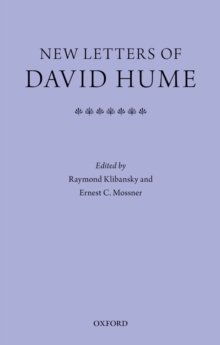 Klibansky and Mossner brought together letters from 1737 to 1776, discovered after the publication of Greig's edition.

Hume's correspondents in this volume include such famous thinkers and public figures as Adam Smith,James Boswell, and Benjamin Franklin.

The edition offers a rich picture of the man and his age, and is a uniquely valuable resource to anyone with an interest in early modern thought.