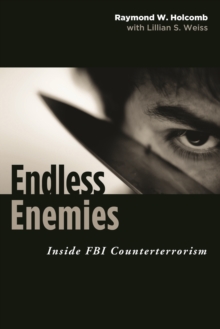 He and his men captured the terrorists behind the 1993 assault on the World Trade Center, investigated the bombings of U.S. embassies, and pursued the killers of the seventeen American sailors who died in the 2000 suicide attack on the USS Cole.

After 9/11, he assisted in interrogating Yemeni prisoners who had information about the attack, which led to identifying al Qaeda and some of the hijackers.

After the capture of one of 9/11's most lethal masterminds, he went on a secret followup mission to Afghanistan. Holcomb's memoir provides detailed information about the FBI that only a longtime bureau insider can reveal, such as prison conditions and interrogation techniques in Guantanamo and Afghanistan.

He describes hunting down and grilling criminals of every ilk around the world, and then creating and leading the FBI's elite cadre of counterterrorism agents who were at the helm of every major post-9/11 investigation, including the infiltration of homegrown conspiracies.

Holcomb's absorbing account gives anyone interested in the training and activities of the FBI's elite tactical units a window into these highly effective organizations within the bureau.